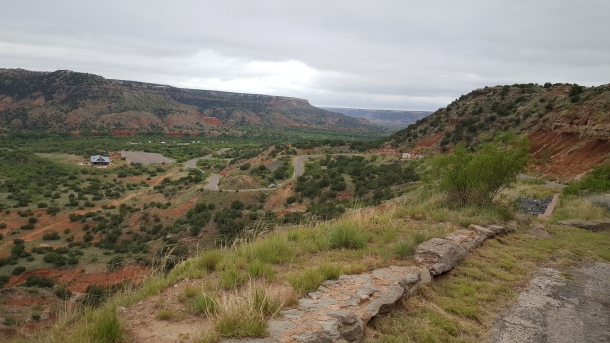 Looking down onto the canyon floor. I love this place.

Enjoying the sun, or rather the cloud cover, at Palo Duro Canyon State Park . – Stefani Lara 2016

On Tuesday I did what I said I would never do in town, I went out as Stefani during the day. The sun was out, people were going about their business, and I had had enough of my self-imposed confinement and ventured out into the day, fully aware of the risk of being discovered by someone I know.

At that moment, I didn’t care. I knew I had to get out. It was off that day, and I hadn’t made it home the previous night, having stayed at my friend’s apartment where I store my things. The next morning, I debated whether or not to get dressed up, but I had no plans, and I was wanting to experiment a bit with my new eyeshadow palette, so I cleaned up, dressed, and nothing.

I hadn’t come prepared for a day in. I didn’t have a book, nor had I packed my laptop. There was absolutely nothing to do. Finally in desperation, I looked over at my friend and asked if she fancied a drive. Of course, she said yes, then was surprised that I meant at that moment instead of after dark, as had been my habit.

We drove from Amarillo down to Canyon. I used to be nervous driving around, even in the dead of night, but now the novelty has worn off. No one knows it’s me, nor do they care. They are too busy paying attention to what’s in front of them to pay attention to a another driver cruising the streets during the day. It’s absolutely freeing.

I drove to my Alma Mater, reminiscing about going to college, my first forays into crossdressing, and how far I had come from those days more than twenty years ago. I could never have gotten in my own car and cruised around back then. I could now, and it was okay.

Next we made our way to Palo Duro Canyon, paid the fare to go in, and continued to drive. I finally worked myself up to stop and step out of the car. I didn’t go prepared to hike, and I don’t think wearing heels and strolling the trails is advisable, so I contented myself  to taking a few pictures and enjoying to brisk, drizzly day.

We stayed down in the canyon for over an hour, wishing we had had the foresight to at least bring something to snack on at the picnic tables. Finally we wound our way back up the canyon walls, stopping a few more times for me to take more pictures, and drove back to her apartment, relishing my time in the sun.

It wasn’t some grand adventure, to be sure, but I stepped out during the day, and I survived. I enjoyed myself tremendously. The fear I felt even as recently as a month ago, has begun to lessen with each subsequent outing. I have become emboldened with each successive trip, waiting excitedly for my next foray outdoors.

Check out the rest of my pictures on Flickr!

3 thoughts on “My day not quite hiking”

I'm a 43 year old transgender woman, coming to terms with my gender identity.

StefaniHinojosa.Com ~ Stefani Within © 2011-2020. Unauthorized use and/or duplication of this material without express and written permission from this blog’s author and/or owner is strictly prohibited. Excerpts and links may be used, provided that full and clear credit is given to Stefani Hinojosa, with appropriate and specific direction to the original content.