I went to the movies. I suppose in the grand scheme of things, not really a revolutionary move, however I went so en femme. Now, I’ve been out as Stefani several times, but rarely here in town, except to a gay bar, or maybe a late night drive. I mean, okay, I went to Walmart a few times, always way after midnight, so not biggie.

But on Tuesday night, I went for it. I got dressed up, bought a couple of movie tickets for the IMAX showing of Fantastic Beasts and Where to Find Them, and went out in public, where normal people congregate, at a reasonably early time. 7:30in the evening, to be precise. And can I tell you what I felt? Nothing. Absolutely nothing. No rush of adrenaline, no feelings of getting away with anything. It was just a normal outing. Completely routine. It was a total anti-climax.

I know it’s a victory of a sorts, that I’m getting to the point where it’s no longer an issue for me. It’s part of the norming process. The more I get used to it, the less I stick out, the less I draw attention to myself, the more comfortable I get. Rinse and repeat. It’s the fact that I did so here in town, where I work, where I know people that has me freaked out. Except it doesn’t. Does that make sense? 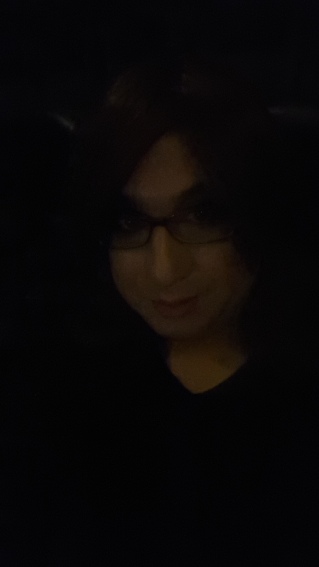 Quick selfie in the theater. Not a lot of light. Bummer! ~Stef~

The people that know about it at work are wondering when I’m just going to just come out. They say I should just do it, show up to the Christmas party as Stefani. Get it over with. Everyone likes me, and they’d have my back in case someone starts anything. I get it, and part of me is getting to that point, too.

I’m not going to rush it. Hell, I never thought I’d be here now, talking about going out in public, but I am. I never thought anyone I knew would be let in on the secret, but they have been. It’s freeing, every little step, every little adventure, is opening that door a little more. It’s an amazing thing.

I was planning on dressing up last night, but I didn’t. I went shopping for a jacket, spent too much at my favorite spot, went to another store, spent too much again. I cleaned out my closet, getting rid of outfits that don’t fit, or I don’t like, so I can make room for ones I do. My wardrobe is getting big! I love it!

I just wish I had more opportunity to dress up. Truth be told, I wouldn’t mind going out for a girls night out at some point. Maybe go out for a date, dinner and a movie, or maybe watch a play or something. Anything, really. The feeling is intoxicating, but I need just a little more each time just to feel that buzz. I miss that exhilaration, that heady feeling of having survived an outing. I no longer worry about leaving my friend’s apartment, or walking to my car.

I get a little nervous when I go out in public, but it’s less every time.  There are some who take offense to my existence, but the hell with them. I’ve had to come to terms with who I am, and it took me a lot longer than it should have. I won’t let others repress me. I’ve repressed myself enough. I’m coming out, on my terms, and on my own time frame.

By the way, the movie was fantastic!

One thought on “Becoming the norm”