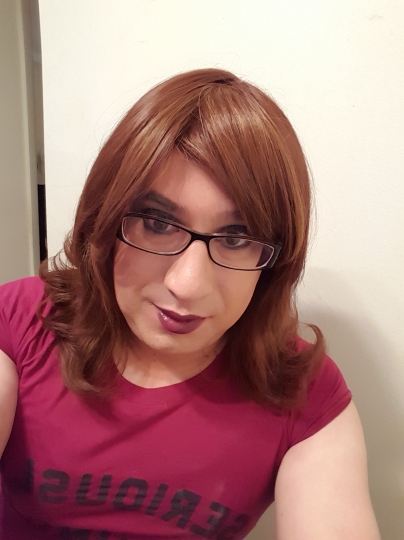 It’s been a while since I’ve posted anything. I’m still alive, though extremely exhausted. Work has been brutal these past two weeks, and I don’t see it letting up anytime soon. I could use some time off. I should look into scheduling a vacation.

Things on the Stefani front is still about the same. I did bring someone else into the fold, my cousin. It began when she brought up a guy we went to school with, someone I always wondered if he was transgendered. There was something about him that made me suspect that he was.

That conversation led me to disclose my own gender identity, though I was nervous to do so. I opened myself up to her, and we ended up talking until after midnight. She was surprised by supportive. I showed her a picture, and she was amazed that I didn’t come across a some drag queen. I took that as a compliment.

Earlier, I had wondered out loud whether I should grow my hair back out, and she pieced it together, that my desire to grow my hair was an extension of my gender identity, and my loathing for wigs. She then made the suggestion that I should try to use extensions instead.

We talked clothing, makeup, and other girl things, which I found quite strange, but oddly satisfying. I could drop all pretenses and be me. It was great. I felt free, happy that at least I have an ally in the family. She did agree with me that my parents would never accept me, nor would my sister, but that’s a longer conversation.

What I hate is that I don’t have ample time to me Stef, only the occasional stolen moments. A friend asked me if I intended to transition, and all I could say is that I didn’t know. I’ve maintained that I had no intentions to do so, but this pull is getting stronger, and though I’m unwilling at the moment to say that I will do so, I have to concede that it is a possibility.

I don’t have to make up my mind yet. I can still dress when I have the chance. It’s the best I can do, and it’s fine for the time being. I have found some measure of peace whenever I do get to dress. I have found happiness, though only for brief moments of time.

7 thoughts on “And yet another”