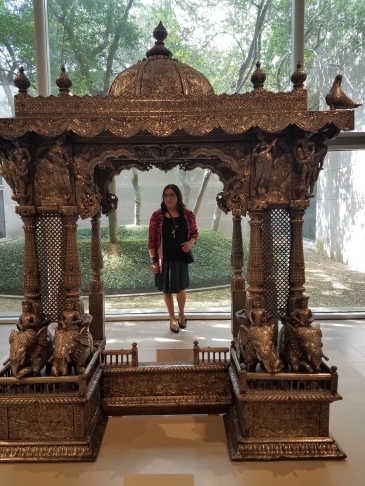 Yesterday took me and my friend into downtown Dallas, specifically the Dallas Museum of Art. Amy has been wanting to take me to the museum for years, and I’ve wanted to go, but it’s never happened. I wanted to go as Stefani, and I hadn’t developed the nerve to go out until now.

We had planned on maybe going to Lake Texoma, but we got up late, and honestly I didn’t have anything to wear to the lake or to go hiking. We sat around, I played on the computer, and we had a late breakfast a little before noon. That’s when I decided that we should see the museum. She heartily agreed.

We got ready as quickly as we could. I chose a skirt and blouse to wear for the day. I wanted a chance to dress up, not in my usual jeans. I thought it would be a nice change from my usual attire. Amy dressed up as well, and we set off on our day’s adventure.

A little about why we hadn’t gone before today. Like I said, I wanted to go as Stefani, but I was afraid to dress up here. Amy’s husband didn’t know about me at the time, and even after he did, I wasn’t comfortable with him knowing, In addition, I wasn’t entirely ready to go out in public. When I did go out, I was self-conscious, and convinced everyone was looking at me, judging me for being some weirdo in a dress.

I’ve grown to relax now. It’s amazing how easily I walked into the museum. So far this vacation I’ve gone into crowded stores, restaurants, and parks. Even if I’m not entirely convincing, I’m not attracting stares or awkward glances. I’m at ease and I’ve become more or less invisible, another member of the crowd. I keep repeating this only because I want to stress this point to others who are on the same journey I am. The more you relax, the more at ease everyone around you is.

We should have gotten to the museum sooner. There was too much to see. We left only because they were about to close. We walked across the street to a park built over a freeway, which was kind of neat. We then headed to the Cathedral Shrine of the Virgin of of Guadalupe. I wanted to see if I would burst into flames if I cross into the church, but they are doing renovations and the doors were locked. I didn’t know how to get in, so we left.

We made our way to the Galleria mall. Amy had worked in the Galleria Towers for several years, and I used to go have lunch with her occasionally. We hadn’t been there in years, so we went. I had to use the restroom. I know that’s not usually newsworthy, but considering the noise Gov. Greg Abbott has been making about the transgender community and which bathroom they use, it has been stressful. I try to use the family bathroom, unisex bathrooms, or just hold it. I had no choice but to use the women’s room. It was fine. No drama. It was a quick pee and go.

Other than that, and a quick stop at Starbucks, we didn’t stay long. We had no intention of shopping. We walked around, reminisced a bit about her time there back in 2000 through 2006, and we left, taking the long way home, stopping only for gas and a couple of pizza to eat once we got home.

Today’s my last day here. Tomorrow I drive home, and Friday I go back to work. It’s depressing. I don’t want to go back, and I don’t want to have to return to being Joe, even if Stefani is a lot of work. It’s amazing how necessary time away is for the soul, how time to one’s self is a tonic that washes away exhaustion and the bitter taste of life.

I have another vacation set for October, a little over six weeks away. I have a wedding to go to, and planning on following a band for a couple of days, seeing them in OKC before following them to Albuquerque the next. Then a few days to myself to recover from such an insane attempt. This is the kind of crap I should have been doing twenty years ago!

But I guess the old saying is true, it’s better late than never. I’m enjoying my life more. I’m not as sad and depressed as I was before. There’s some direction in my life now, even if that direction terrifies me. At least it’s not a scary as living a stagnant life.

One thought on “Adventures in Dallas”