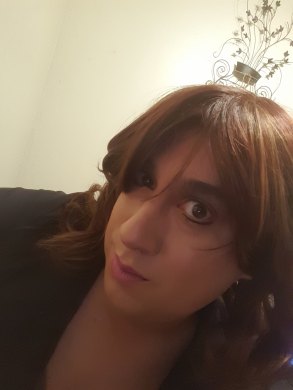 A girl has a crush on me. I say a girl, but it’s a woman. I’ve only met her once, but I thought she was pretty enough, but that was months ago. She sent me a friend request on Facebook, which I accepted. She was after all, I thought, a friend of a friend I knew from high school.

We didn’t communicate much other than the occasional comment. Usually it was her commenting of something, but I won’t split hairs here. A few weeks ago, after posting a picture of me sitting in the waiting room of Safelite, my rear window needing to be replaced, she made a comment, which I promptly replied to. We went back and forth for a while before my high school friend sent me a message, “I think my niece has a crush on you.”

I’m flattered to be sure, and I can’t help but feel excited. I mean a beautiful woman likes me? Hell yeah! But she likes the male side of me. She doesn’t know about Stefani, and letting her in feels me with a sense of dread. Letting anyone in again is something I had hoped to avoid.

And to be sure, I know I’m jumping the gun, but it’s something I’m concerned with. I spent years concealing this aspect of myself, denying that Stef even existed. My then wife let me know several times by her snide asides that she valued me less as a man and as a husband just because I told her about this part of me.

I vowed never to let any woman hold me hostage. I won’t hide myself for anyone just because they are insecure with me. I understand that most women want a man to be the man, all talk about equality notwithstanding. We can talk all day about gender roles, but at the end of the day a woman wants her man to be the man, and being a crossdresser, or transgender, makes women look at her s.o. as less than a man.

At least that has been my experience. I’ve heard from some very liberal women that they don’t understand transgender. One who admitted to being a bisexual woman, said it to my face, not knowing that I am transgender myself. Damn, but can I act the man or what?!

So now just the prospect of a innocent crush is enough to give me pause. I’ve heard from many that have found love and understanding from their girlfriends or their spouse, and of them I’m a bit envious. I envy that they have someone to love and someone who understands them. I also envy the courage to open themselves up to that rejection.

Right now, I’m hoping to at least go on a date with this woman. Maybe something will come out of it, but more than likely it won’t. I can’t let fear hold me back in life or in my love life. I won’t know until something happens. Lord, I’m scared!