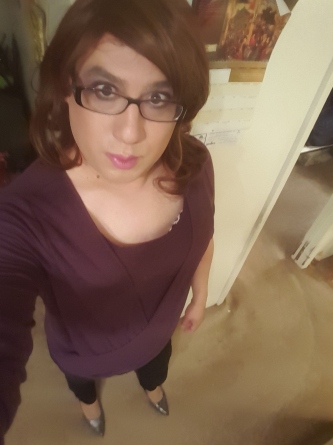 I’m taking a day trip over to Oklahoma City next week. I honestly don’t know where we’re going or what we’re going to do, but it’s a chance to get away for a day and explore a city I’m not familiar with. It’s also a chance to spend a little more time as en femme out in public.

I’m planning on leaving Monday evening after work. I’m taking my friend along. We’ve been talking about doing this since I started dressing and I started feeling the itch to go public. It’s been at least a year, maybe longer. We’ve talked about OKC and Dallas, and even Albuquerque. OKC is closest, and since I only have one day, it made the most sense.

The only question I have is whether to go dressed up or in drab. Driving in boy mode will be more convenient, but it won’t be as much fun. If I drive as Stef, then I’ll have that much more time to enjoy being me, but then the issue of bathroom breaks arises. Also checking into the hotel becomes all that much more fun!

I won’t have to decide immediately, but I will have to before I leave work on Monday. I’ll have to shower and dress. Then there’s the issue of dinner to contend with. Do we eat on the way or do we stop somewhere? Or before we leave? I have a tendency to overthink things, don’t I?

That’s okay. I’m excited to leave the city and explore a new area, a new city. I’ve only been there once, almost twenty years ago, and that was only for a couple of hours. This time we’ll get there Monday night, and leave Wednesday morning. So, for at least one glorious day on Tuesday, I’ll get to be Stef the whole day. It’ll be a great day!